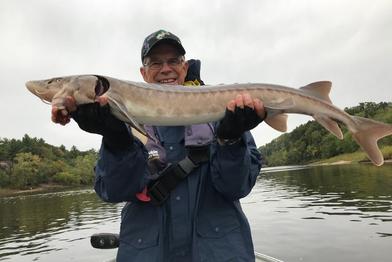 ​The wind and temperatures were not too kind to the anglers for the Classic Championships.  Three different season position battles were to be decided at Lake Wisconsin.  Angler of the Year was locked up by Ken Kuhnle but 2nd place battle between Myrna and Patrick was yet to be determine.  PJ needed a win to move into second place held by Myrna Wands.  It was similar with total fish points but PJ was in second and Myrna was in third.

Co-Angler of the Year was down to three anglers. Don Ladenberger lead going into the tournament with Keith Luker and Anita Kuhnle chasing Don.  With Keith Luker a no show it was now between Anita and Don.

With poor fishing day one leader was the AOY Ken Kuhnle with just two fish, a pike and a walleye.  Second place was PJ, followed by Myrna in third.  The year long battle with the top three anglers continued into the Classic Tournament.

Co-Angler of the year battle changed leaders as Anita had a 4th place finish on Day One with Don back in 7th place.

The first day leader had motor issues with sand going out of the area known as the fingers on Lake Wisconsin.  This kept Ken from his favorite spot.  Ken did manage a keeper sauger.  PJ in second also had one sauger not enough to make up any ground on Ken.  Myrna fishing in Okee Bay added to her pile of perch and with a surprise Northern Pike jumped from third all the way to first passing Ken by one perch.  For Myrna it was her first Classic Championship in over 20 years with the club.  Myrna passed PJ for second place in overall fish points (See fish pts below) in a season long battle as the two traded 2nd and third place all season long.

Co-Angler of the Year was captured by Anita as Don struggled to put legal size fish in the boat.  Randy Reopelle the Rookie of the Year finished in 5th place with a nice showing.  Last year AOY Mike Wollenberg finished 4th, Mike brought in the only bass of the event.